When I was an Emergency Room physician and teaching (and a non-believer in holistic medicine which I practice now), I knew the importance of the placebo effect. But now I can see how the mind can create what I call a negative placebo effect.

There were times in the ER that I would take sample capsules and empty them and give them to a patient with the admonition to “be careful since these capsules are very potent pain killers.” I never had a complaint that the medicine did not work (and it was free since the empty capsules originated from the drug representatives samples).

The title of this article could be the antithesis of the placebo affect because there are people out there that for different reasons  do not want to get better and some even do not have any real pathology to cure. Maybe I should call this the “negative placebo affect.” I am not admonishing anyone in this article since there are different reasons for this; sometimes  subconscious reasons that the person may not even realize why they stay feeling sick. For example, I had a backward patient that under hypnosis the reason for his constant complaints became overt. The reason was that as a child having his tonsils out he remembers the family paid him a lot of attention as did the nurses and he got plenty of ice cream. Therefore, being sick or believing so he sought the same bonding and love from his parents.

Sometimes a person has anger issues with another close person (family or lover,etc) and being sick can give them freedom to be demanding or even getting even by making that person a servant to them out of guilt. Yes, it happens! Maybe another person is just tired of being the caregiver and the way out of this is to be taken care of by having headaches or some other dis-ease.

I have tracked down the causative agent in a few people that were getting sick on and off too often. It was the only way they could get some rest without feeling guilty about taking time off from work or from caring for other(s). Sometimes when they have programmed their subconscious mental level that they are sick they really become sick (and also from any one of the reasons above which can cause  stress that goes along with illnesses). It has happened to me as a child when I would lie about pretending to be sick to avoid school and then really getting a cold or sore-throat.

As an example, now that I am an Holistic MD I have noticed an alternative diagnostic test that may help uncover why a positive or negative placebo effect may be working on a client: the practice of kinesiology also called muscle testing. I certainly am not against this evaluation and have used it to some degree on clients and have had it used on me successfully and unsuccessfully. But I have found severalpossible flaws in this evaluation (as I have in blood testing also) that should be considered:

Now in my practice I do use blood and urine testing and sputum testing to help for a final diagnosis, but only as an adjunct to my 2–3 hours interview with the client. For example, if a thyroid blood test comes back within the normal limits; but the client tells me that they are losing their hair, always cold, gaining weight but exercising and not eating differently then before, fatigued constantly and that the outer 1/3 of their eyebrow has fallen out I strongly consider that they have a low thyroid condition (hypothyroid) in spite of the laboratory test. I may order other thyroid tests to rule out certain thyroid conditions that I did not originally test for like an autoimmune thyroid problem, but start treating the client on a low natural thyroid medicine. Not conventional I know but it has never failed me. The point is that I do not use just testing to come to a diagnosis but symptoms and signs, the interview and physical along with any tests I believe necessary.

Back to the title of this article and my beliefs! If a person intermittently but often gets sick, or gets chronically sick without respite no matter how long they have been treated by others and myself I need to do certain things and go through certain thoughts.

Permit me to go through a case study which may or may not apply to anybody else out there. It has to do with a client of mine that came in so fatigued that she could not function doing anything except bathroom obligations. She would be defined as a chronic fatigue patient since this had been going on for years and she saw many allopathic and integrative-complementary doctors and healers before being brought to me by her sister. All her laboratory results were normal including the complete blood count and no anemia was evident,etc. Her sister incidentally was an alternative practitioner . She not only took care of her older sister and also the mother who interestingly had similar symptoms of fatigue. In the family there is an older brother that did energy machine healing who was free of any similar problems. I treated the sister with IVs of colloidal silver, Mega Vitmins with extra B12 and folic acicd, and amino acid IVs  since her nutrition regimen was poor and she stated she was too exhausted to eat  even though her younger sister prepared the family meals. Treated her for weeks also with stress therapy. Finally I told her she needs someone that knew more then me and actually it would be helpful if the person was experienced in Chronic Fatigue Immune Disorder. She never got better. The sad part is her younger sister developed the same symptoms, again with a complete work-up and labs all normal. She became bed ridden and fatigued constantly and could not work neither.

I believe to this day that this case points to how a placebo-being the mind – can also be negative. I hope that it also points out that stress is the main culprit. if one takes allopathic or alternative treatments and does not search for the cause both treatments should be called alleviation and not cures.

Alan J. Sault MD, ABHM-Diplomat, Author: Emotional Vampires and Your Hormones: an holistic physician’s view on how stress affects your well-being and what you can do about it 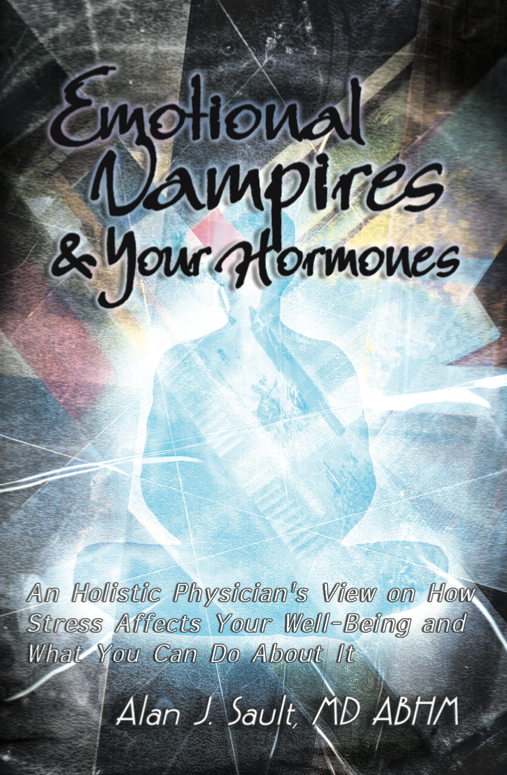